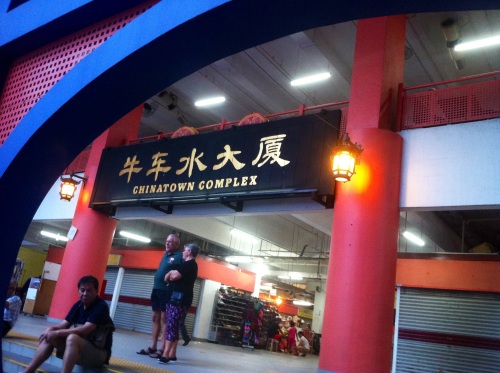 Singapore Chinatown is the island’s traditional Chinese quarters. The Chinese name for Singapore’s Chinatown is known as 牛車水, which is literally translated as “Ox-cart water” with reference to the ox-pulled carts that used to haul in drinking water during the early periods of Singapore’s history. Chinatown has still retained its original charm until the present day. As the majority of Singapore’s population is the ethnic Chinese, Chinatown features distinct architectural and cultural elements that can be found at the central streets lined up with conserved pre-war shophouses selling all sorts of wares like Chinese trinkets, handicrafts, antiques, traditional clothes, tea, herbs and medicine. Due to the fact that the Indians and Muslims had lived alongside the Chinese from the very early days, Chinese temples can be found alongside Indian temples, mosques and churches, all of which accentuate the multi-racial and multi-cultural society that make up the country.

Geylang Serai Market is situated right in the heart of the Singapore Malay community and its iconic architecture embraces the rustic charm of the Malay kampong or “village” house of old. It was originally built in 1964 and has gone through major reconstruction in 2006. The market is now an active hub of energetic vibes and it continues to preserve the Malay roots through hawker stalls offering a wide selection of Malay and Indian-Muslim food specialties. There is also a wet market that sells all sorts of fresh produce like vegetables, fish, meat, Malay and Middle Eastern spices and ingredients. Shops are also lined up that sell Malay clothing, groceries, household wares and other knick-knacks.

Tekka Centre is a landmark in Little India, which is a neighbourhood that serves the Indian community in Singapore. The multi-purpose building complex consists of a wet market that sells fresh vegetables from India and seafood, more notably crabs from Sri Lanka. There is also a food centre with stalls that sell North and South Indian, Chinese and Malay food as well as shops selling groceries, traditional Indian costumes, clothes and gold.

The market was originally known as Kandang Kerbau, which means “buffalo pens” in Malay. This referred to the many slaughterhouses that operated in the area until the 1920s. The name Tekka was coined from the Hokkien dialect, and the market was known as “Tek Kia Kha“, literally meaning “foot of the small bamboos” as bamboo once grew on the banks of the Rochor Canal. This was later adapted into the more popular and commonly known name Tekka Pasar, where “pasar” means “market” in Malay.

Tekka Centre continues to remain an active enclave where different ethnic communities congregate and share cultures and even religious beliefs. Be surprised to find Chinese stallholders who can speak the Tamil language, and Indians who can speak Chinese and its dialects. In fact, during the Hindu festival of Thaipusam, you can find many Chinese being actively involved with the Hindu tradition of seeking blessings, fulfilling vows and offering thanks. Some of them even go through the ritualistic practice of piercing their tongues with skewers and carrying spiked ‘kavadis‘ decorated with flowers and peacock feathers balanced on their shoulders.

Joo Chiat Road got it’s name from a Chinese philanthropist and owner of a coconut, gambier and nutmeg plantation Chew Joo Chiat who in the 1900s acquired considerable amounts of land in the Katong/Joo Chiat area and made it open for public use. It has been gazetted as a conservation district and is the country’s first Heritage town. Here you will find many unique Straits Eclectic architectural style shophouses and colonial bungalows that have been conserved, which give the area its true multicultural flavour of European and Peranakan or “Straits Chinese” heritage. The charming area of Joo Chiat and nearby Katong’s rich cultural mix have contributed to its unique Peranakan cuisine. Be enthralled as you walk along the well preserved heritage shophouses and eateries that reflect a strong Peranakan culture offering wide Peranakan culinary choices such as nonya kuehs and other delicacies

In the Singapore context, the word “Heartlands” is commonly used to describe surburban towns where most of the Singapore population live. They are usually void of tourists and would contain largely residential areas with Housing Development Board (HDB) housing flats, shopping complexes, public schools, markets and hawker centres selling traditional Singaporean hawker food. The surrounding neighbourhood is often very busy with the goings on of the average Singaporean doing their every day things like grocery shopping, sending their children to school and having their meals at the neighbourhood hawker centre.

One thought on “Hawker Centre Destinations”

This site uses Akismet to reduce spam. Learn how your comment data is processed.